A new member of the Cannova family, available for the first time in 2017.

Similar to Cannova Bronze Scarlet except for a more orange flower

A distinctive and attractive variety, with nicely shaped flowers in an unusual shade of pink.

This is a range of 4 varieties which are intended to be grown as water plants. They grow with the roots and crown totally immersed in water, but they can be grown equally well in the garden border, and seem just as drought-hardy as other cannas. They are all tall plants (2 metres).

They were bred in America (at Longwood Gardens, Pennsylvania) from C. glauca which is always found in shallow water. Like C. glauca, they all have narrow lance shaped glaucous (bluish) foliage, and attractive rather spidery flowers. There are 4 varieies: 'Ra' (yellow), 'Erebus' (pink), 'Endeavour' (red), 'Taney' (orange). All are named after ships (Erebus and Taney are American warships).

'Ra' is the most popular, followed by 'Erebus', and both were awarded AGM at the 2002 Wisley Canna Trial. We served on the Trials Committee (status Technical advisors as owners of the UK National Collection). 'Ra' was very popular with the Committee and was awarded AGM ststus as soon as the first flower opened. 'Erebus somewhat later. In our opinion 'Endeavour' should also have been awarded AGM. 'Taney' is not very good (though beauty is in the eye of the beholder).

In the Britich climate, Water Cannas usually die if left in the outdoor pond over winter. The rhizomes are very slender and often die during the winter even in glasshouses if allowed to go dormant. For this reason we recommend taking them out of the water and growing them through the winter as plants in a frost-free greenhouse. They are happy not standing in water.

Occasionally other canna varieties varieties are encountered with the prefix "Water Canna". These are imposters or wrongly named. In our opinion "Water Canna" refers to these four varieties bred at Longwood Gardens. 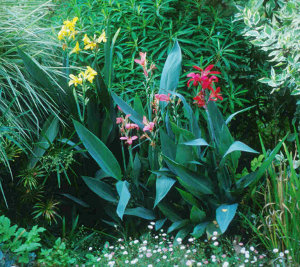 These are the original wild cannas. They are all native to the tropical Americas. To read more about the natural history of canna species see: Canna Taxonomy

If anyone has canna species that we don't have we would be grateful if they would get in touch with us.